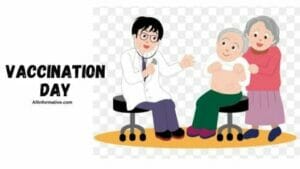 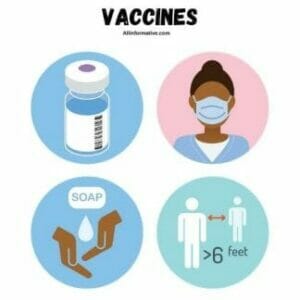 A Vaccine is biological preparation that provides active acquire immunity to particular infectious disease. A vaccine typically contains an agent that resembles disease causing microorganism. It is often made from weakened or killed forms of microbe, its toxins or one of its surface proteins. The agent stimulates body’s immune system to recognize agent as threat, destroy it and to further recognize and destroy any of microorganisms associate with that agent that it may encounter in future.

Vaccines can be prophylactic, to prevent or ameliorate the effects of future infection by natural or “wild” pathogen, or therapeutic, to fight disease that has already occurred such as cancer. The Administration of vaccines is called vaccination. Vaccination is the most effective method of preventing infectious diseases; widespread immunity due to vaccination is largely responsible for worldwide eradication of smallpox and restriction of diseases. Such as polio, measles and tetanus from much of world.

The effectiveness of vaccination has been widely studied and verified. For example, vaccines that proven effective include the influenza vaccine, the HPV vaccine and the chicken pox vaccine. The World Health Organization reports that licensed vaccines are currently available for twenty five different preventable infections. The terms vaccine and vaccination are derive from Variolae vaccinae.

The term devised by Edward Jenner to denote cowpox. He used phrase in 1798 for long title of his Inquiry into Variolae vaccinae Known as Cow Pox, in which he described protective effect of cowpox against smallpox. In 1881 to honor Jenner, Louis Pasteur proposed that terms should be extend to cover new protective inoculations then being develop. 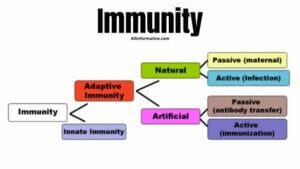 Protection from an infectious disease. If you are immune to a disease, you can be expose to it without becoming infected. At least 19 countries have no fault compensation programs to provide compensation for those suffering severe adverse effects of vaccination. United States’ program is known as National Childhood Vaccine Injury Act and United Kingdom employs Vaccine Damage Payment.

Vaccines also help prevent the development of antibiotic resistance. For example, by greatly reducing the incidence of pneumonia caused by Streptococcus pneumoniae, vaccine programs have greatly reduced the prevalence of infections resistant to penicillin or other first-line antibiotics. The measles vaccine is estimated to prevent a million deaths every year.

Vaccinations given to children, adolescents or adults are generally safe. Adverse effects, if any are generally mild. The rate of side effects depends on vaccine in question. Some common side effects include fever, pain around injection site and muscle aches. Additionally, some individuals may be allergic to ingredients in vaccine. MMR vaccine is rarely associate with febrile seizures. 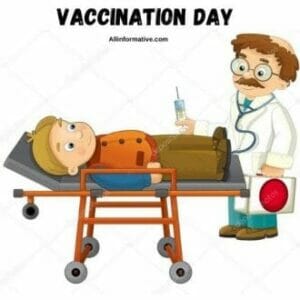 For over a hundred and fifty years, vaccines saved people from diseases that would have hampered progress of humanity. Amid Covid-19 pandemic, vaccines have brought world together in a way that we have never seen before. India emerged a leader in vaccination drive against Covid-19 pandemic. 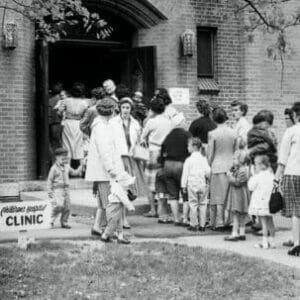 Vaccines are essential to help us develop immunity against deadly diseases. With present Coronavirus pandemic claiming about 2.66 million lives, vaccination has once again acquire paramount importance. On occasion of National Vaccination Day 2021, we take brief look at its history, significance, objectives and this year’s theme.

March 16 is observe as national Vaccination Day by Government of India, every year. It was on March 16, 1995, when day was first celebrate officially after Pulse Polio Immunisation programme became operational. The first dose of Oral Polio Vaccine was administer in 1995 on this date.

Under the World Health Organisation’s (WHO) Global Polio Eradication Initiative that had begun in 1988. Children who in age range of 0-5 years were given two drops of vaccine orally in public health centers. Vaccination against Polio however, it had already started in 1978 and on March 27, 2014. India was declare polio free by WHO.

What are vaccines and how do they work? 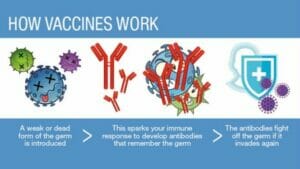 According to the World Health Organization (WHO), “Vaccines contain weakened or inactive parts of a particular organism. That triggers an immune response within the body.” When a person receives the vaccine shot, he or she “very likely to be protect against the target disease”. But the WHO says, “not everyone can be vaccinate” as they may have “underlying health conditions that weak their immune systems”.

What is the purpose of the National Vaccination Day? 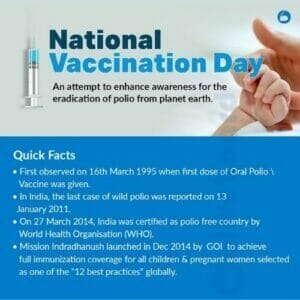 The National Vaccination day started with the aim of curbing Polio plaguing the world. The day observed to better awareness about the disease and how it can be eradicated from the planet. About 172 million children immunized during each National Immunization Day, said the website of the National Health Programme.

What is the Pulse Polio Program:

Under the Pulse Polio Program, two drops of the oral vaccine given to all children younger than five years of age. The program worked effectively as India declared Polio free by the World Health Organization in 2014. The last polio case in the country reported from West Bengal on January 30th, 2011.

Since then, vaccine has become an important preventive mechanism for difficult diseases like Tetanus, TB, DPT, Measles, Rotavirus, Mumps, etc. 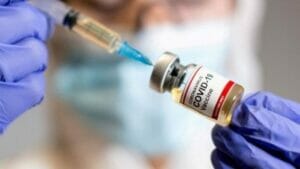 As COVID-19 vaccines are authorized and then recommended for use in the United States, it will be important to understand what is known about each vaccine. CDC will provide information on who and not recommended to receive each vaccine and what to expect after vaccination. As well as ingredients, safety and effectiveness.

Currently, three vaccines are authorize and recommend to prevent COVID-19:

A Vaccine is biological preparation that provides active acquire immunity to particular infectious disease. A vaccine typically contains an agent that resembles disease causing microorganism. The Vaccination Day celebrate 18 March every Year in all the World. Under the World Health Organization’s (WHO) Global Polio Eradication Initiative that had begun in 1988. Vaccines usually administered through needle injections but can also administered by mouth or sprayed into the nose.

What is the purpose of vaccines?
vaccinations are an important part of family and public health. Vaccines prevent spread of contagious, dangerous and deadly diseases. These include measles , polio, mumps , chicken pox, whooping cough , diphtheria and HPV.
When we celebrate Vaccination Day?
Vaccination Day celebrate 18 March every Year in all the World.
How we use vaccines and do Vaccination?
Vaccines usually administer through needle injections but can also administered by mouth or sprayed into the nose.