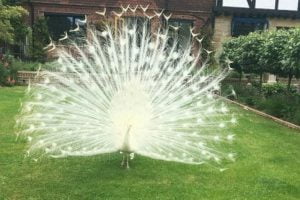 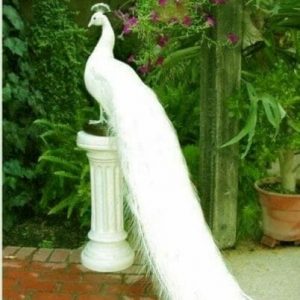 The two Asiatic species are blue or Indian peafowl originally of Indian subcontinent and green peafowl of Southeast Asia. One African species is  Congo Peafowl native only to Congo Basin. Male peafowl are known for their piercing calls and their extravagant plumage. The latter is especially prominent in Asiatic species. That have an eye spot “Tail” or “Train” of covert feathers which they display as part of courtship ritual.

The functions of elaborate iridescent coloration and large “Train” of peacocks have been subject of extensive scientific debate. Charles Darwin suggested that they serve to attract females and showy features of males had evolve by sexual selection. More recently, Amotz Zahavi propose in his handicap theory that these features act as honest signals of male’s fitness. Since less fit males would be disadvantage by difficulty of surviving with such large and conspicuous structures.

The White Peacock is just as lovely in beauty. Its feathers and appearance is nearly exactly same as its colorful counterpart except its feathers are white. The White Peacock fans out its white train to display its feathers, revealing cloud of white magnificence. The all white color of peacock is trait of beauty among species of beautiful birds. A white version of an animal can be found in nearly any species. 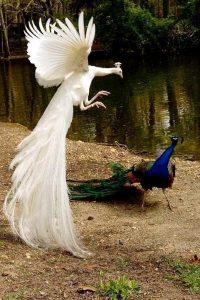 The White Peacock is rare form of well known species, namely blue peacock. They have same characteristics. Its white plumage results from Genetic mutation. Long tail feathers are redeeming feature of male peacocks, enabling them to be fanned out. Comprising about 150 feathers, male peacock fans out its feathers to impress females.

Peacocks are native to India. When the British Empire conquer India they spread peafowl all over Europe and America. That is when noticeable color white began to appear in peafowl. It has been speculate that few white peafowl bred naturally in India. It is unknown if white peacocks appeared before British discovered them but first known white color variation appear in 1830. They are now bred for the white color in captivity.

The peacock is therefore one of oldest known ornamental birds. In Europe, peacocks have been bred since 18th century. The beauty of peacocks also fact that they stay where they reside make them ideal birds for public parks. A symbol of beauty, wealth, immortality and vanity. Peacocks have always had special place in animal world.

In wild, peacocks mainly live in dense Indian jungle. In India, peacocks are sacred and very popular. The Peacock is an exquisite bird with vivid colors and uniquely shape feathers. But do you know that white peacock is male or female? The word ‘peacock’ actually refers to the male only. The collective term for these birds is ‘peafowl’. The males are ‘peacocks’ while the females are ‘peahens’. Then, babies are ‘pea-chicks’. 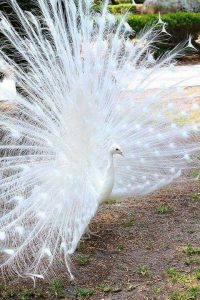 When compared to females, males are taller and longer. Usually, small-sized female peacocks weigh much less than the males. While adult males have a body weight that ranges between nine and thirteen pounds, females weigh around six to nine pounds. An adult male can be as long as 7.5 feet (including the tail), whereas an adult female is around 2.5 to 3.5 feet in length.

Their feathers tend to be either brown, gray or cream in color. Females have white bellies, while males’ bellies are the same blue as the rest of their plumage. Although males look far more attractive, females have the advantage in the wild, as it’s easier for them to camouflage themselves and avoid predation.

If White peacocks are bred to white peahens all of their chicks will be white. These lovely birds have all come to be known as Peacocks, but the correct name of this species of bird, is peafowl. It is the male that is referred to as a Peacock, and the females as peahens.

The baby peafowl are called peachicks. But one rare type of peacock makes a spectacle even without all the bold color. The white peacock is a variation of the blue peacock native to the Indian subcontinent, but is now bred in captivity around the world. White peafowl have a genetic mutation called leucism.

Many interesting facts about this white peacock, one of them is that there are small crystals on their feather. White peacock facts, When peacock is stretching its tail, nobody can ignore it. The white colors of its feathers are are so glamours and luxurious that will make you blown away.

White peafowl have genetic mutation called leucism. This causes inability of pigment to be deposit into their feathers which results in white appearance. Though leucism can cause animals to be quite tame in some different species, this is not case with white peacock.

Peafowl is one of most beautiful birds in world that has beautiful feathers. There are some species of this birds, Indian peafowl, White peafowl, Green peafowl and Congo peafowl. They are omnivores that eats insects, plants and small animals. They can grow about 90 to 130 cm tall and weigh around 4 to 6 kg. However, peahens are slightly smaller. White peacock is one of various types of beautiful peacock. This type of white peacock has some facts that you might not know. Want to know more? Check out explanation below.

1. White Peacock Is Not Albino:

The white peacock is special peacock domesticate Indian peafowl that has been born in all white due to genetic variation. But the fact is this birds are not albinos. The albino birds have a complete lack of color and usually have red or pink eyes. 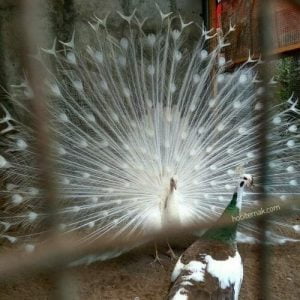 Different with albino birds, peacock has blue eyes and color skin.  The pea-chicks of peafowl are born yellow but then become white as they mature. The loss of pigmentation of this beautiful bird is cause by leucism. The animals with this genetic mutation retain their normal eye color. Only its feathers that don’t have pigmentation.

The picture of white peacock birds, tail is so beautiful when it’s flap and goals is to attract attention of peahen. When white peacocks are bred to white peahens, all of their chicks will be white. Nevertheless, peafowl also contains some genes such as:

When you mate white peacocks to different colored peahens, result will be wide variety of colors in chicks. 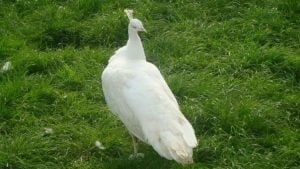 White peahen has shorter tail than peacock. Because, This peacock holds an important role in occurrence of marriage. So it’s appearance is more attractive.

3. Beautiful Tail of White Peacock will Perfectly Grow After 2 Years-Old: 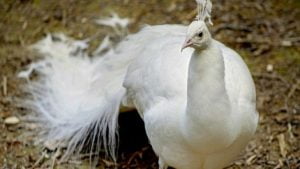 The tail feather of peacock will fully grow when it’s reach 2 years old. The feather is longer and more beautiful that peahen.

4. There Are Small Crystals on Their Beautiful Feather: 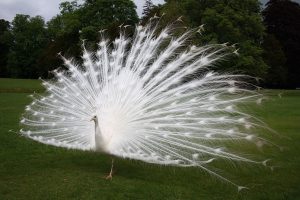 When you see flapped white Peacock tail, you might ask why it’s sparkling? The answer is, there are small crystals cover feather of white peacock. So, when feather tail flapped under sun, it will sparkling of reflection of sun light. 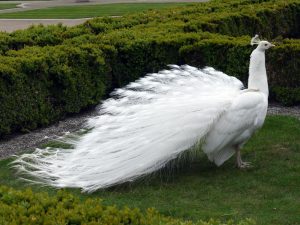 As we know that peacock is know for brilliant colors. The peacock tail known as train is most extravagant part of this bird. In case of, trains are dazzling white. It can measure 4-5 feet long even longer than rest of body. 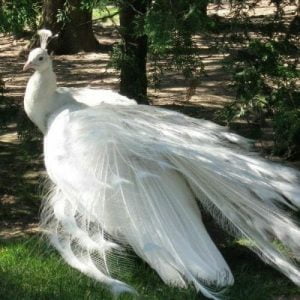 White peacock and peahen is native from India, but to prevent extinction, there are institutions that legally maintain peafowl.

All of peafowl is rare birds. And it is said as a rare species of peafowl due to the special condition of genetic mutation called Leucism. But there are actually more reasons why this bird is rare.

Why Are White Peacocks Endanger? 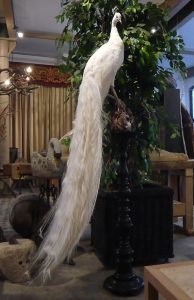 The widespread hunting for meat and feathers, collection of eggs and chicks has create endanger problem for all of peafowl species. It is also combine with loss of natural habitat and human interference.

Even when white peacocks are kept in residential area, this is still problem. The expansion of area is nuisance. The noise and atmospheric pollution create by growing civilization threatens tranquil environment. Moreover, more than  human treats, this birds also face an existential challenge from other species from nearby places. That have enter territory in droves. For example monkeys and dogs etc.

In the forest, adult peafowl can escape ground predators such as leopard, dholes and tiger by flying into trees. Sometimes, they are also haunt by larger birds of prey like crest hawk eagle and rock eagle-owl.

In addition to peacocks, there are various types of chicken breeds that you can keep in your backyard. Because peacock is already quite rare, you can also maintain other types of ornamental chickens that are also interesting and easy to maintain.

White peafowl have genetic mutation called Leucism. The White Peacock is rare form of well known species, namely blue peacock. They have same characteristics. This is just as lovely in beauty. They have longer and more beautiful tail. Only that peacock who will have long and beautiful tail feathers. White color of this peacock, symbolizes purity and eternity.