Eid ul Adha literally means the Eid of sacrifice. Muslims sacrifice an animal on this day, symbolic sacrifice that reminds us of real sacrifice required throughout life. Eid ul Adha is celebrate in the sacrifice of Ibrahim to follow Allah’s command to sacrifice his son. In this page we talk about Eid ul Adha | According to Islamic Calendar Date & Time. 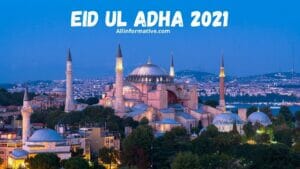 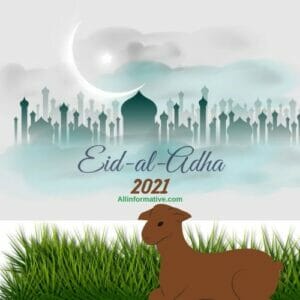 Eid ul Adha is also called Eid ul Azha, Eid e Qurban and Eid ul Kabeer. Muslims around world observe this event. This sacrifice is of our negative emotions such as malice, hatred, negativity and pride. Eid ul Adha or ‘Celebration of Sacrifice’ also known as the Greater Eid. Wishing Eid to Someone May Allah give you all the prosperity and success. May Allah bless you with wealth and happiness and give you a healthy life.

In Muslim countries, Eid al Adha is a public holiday that involves animal sacrifice, known as Qurbani, prayers and family gatherings. The day begins with morning prayers, followed by visits to family and friends and the exchange of food and gifts. Everyone is welcome to celebrate. If you have Muslim friends or co-workers, be sure to just wish them an “Eid Mubarak” or “Happy Eid”. 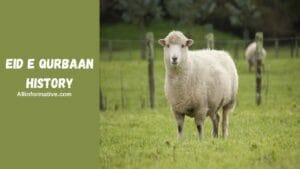 Ibrahim known as Abraham in Christian and Jewish traditions, commanded by God to sacrifice his adult son. He obeyed and took Ishmael, Ismail or Ismael to Mount Moriah. Just as he was to sacrifice his son, an angel stopped him and gave him a ram to sacrifice in place of his son. Some people dispute that the son of sacrifice was Isaac. Regardless, these events are remembered and celebrated at Eid al Adha.

The Islamic calendar is based on observations of the Moon and the length of a particular month can vary between years. For this reason, predicted dates of Eid al Adha may corrected at the start of the month of Dhul Hijja. This is around 10 days before the start of the festival. 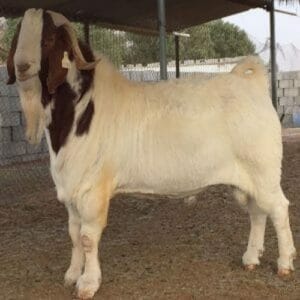 Qurbani or Uḍḥiya as it is known in Arabic. It is the practice of sacrificing an animal for Allah. Every year, on days of Eid ul Adha from 10th to 13th of Dhul Hijjah. Muslims around the world sacrifice an animal to mark the completion of Hajj. This practice commemorates thesacrifice of Ibrahim thousands of years ago. They prepared to sacrifice his beloved son for Allah’s sake.

Qurbani is not simply slaughtering of animal and distribution of its meat. It more than commemorative ritual. The word ‘Qurbani’ derived from the Arabic, ‘qurban’ which has its root in Arabic word ‘qurb’ meaning ‘nearness’. The purpose of offering Qurbani is to draw near to Allah.

Through Qurbani, we reaffirm what we sometimes forget in hustle and bustle of everyday life. That we completely submit to Allah. We are willing to sacrifice whatever is ask of us to be close to Him and gain His pleasure. Just as Prophet Ibrahim (as) did so many years ago.

Thus, an important part of Qurbani is remembering to hold onto our sincere intentions and striving to be closer to Allah through this symbolic sacrifice. 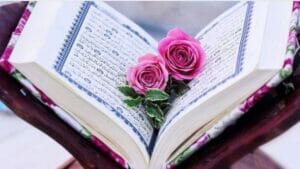 “I was present for Eid with Umar bin Khattab. He started with the prayer before the sermon, and said: ‘The Messenger of Allah (saw) forbade fasting on these two days, the Day of Fitr and the Day of Adha. As for the Day of Fitr, it is the day when you break your fast, and on the Day of Adha you eat the meat of your sacrifices.” Sahih

The Prophet (p.b.u.h) used to Nahr or slaughter sacrifices at the Musalla (on Eid-ul-Adha).

On the day of Eid-ul-Fitr and Eid-ul-Adha a spear used to be planted in front of the Prophet (SAW) [as a Sutra for the prayer] and then he would pray.

Ibn Abbas (ra) said it was, ‘A ram which had grazed in Paradise for forty years’.(Tabari)

‘The Prophet (saw) sacrificed for the one who could not sacrifice from his ummah, one who bore witness to the Oneness of Allah and [his] Prophethood’.(Tabarani and Ahmad) 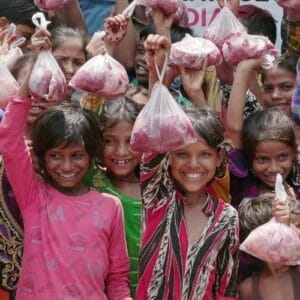 One important tradition for Eid al-Adha is helping those in need.

An animal, like a cow, Sheep, Camel or goat sacrificed. The meat then get donated to people who can’t afford it. Not all Muslims sacrifice an animal themselves. They can buy special meat from shops and donate that. Or they can donate money to charities that give special meat to others.

All these ways honour the story of Ibrahim. Taking care of others is a very important part of being a Muslim.

The festivals of Aid Al Adha in the Muslim countries extend to four days, which are the day of the sacrifice and the three days of Tashreeq. This creates an atmosphere of joy and happiness and it is an occasion for the hearts to rejoice and for the families to gather and to share nice moments. It is an occasion for Muslims to help the poor and to create more and more solidarity between the people. Good deeds and good moments are the pure goal of this occasion.

What Do People Do on this Eid? 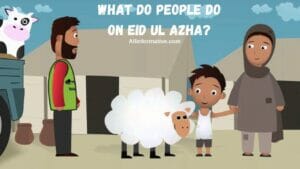 At Eid ul Azha, many Muslims make a special effort to pray and listen to a sermon at a mosque. They also wear new clothes, visit family members and friends and may symbolically sacrifice an animal in an act known as qurbani. This represents the animal that Ibrahim sacrificed in the place of his son.

In some traditionally Muslim countries, families or groups of families may purchase an animal known as udhiya, usually a goat or sheep, to sacrifice, but this is not common or legal in many parts of Australia, Canada, New Zealand, United Kingdom, United States or other countries. In these countries, groups of people may purchase a whole carcass from a butcher or slaughterhouse and divide it amongst themselves or just buy generous portions of meat for a communal meal on Eid-al-Adha.

People also give money to enable poorer members of their local community and around the world to eat a meat-based meal. Eid ul Adha is another important festival in the Muslim calendar. Some Muslims may regard this as the most important festival as it remembers the prophet Ibrahim’s willingness to sacrifice his son when ordered to by Allah .

In the period around Eid al Adha, many Muslims travel to Mecca and the surrounding area in Saudi Arabia to perform the Hajj pilgrimage. Package holidays organized from many countries. Muslims may plan and save for many years to enable them to take part in this event. It is one of the five pillars of Islam.

Why is Eid important? 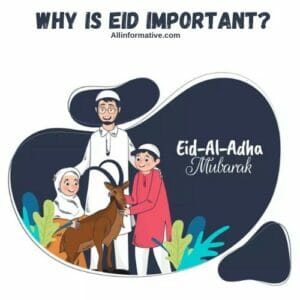 The two Eids recognize, celebrate and recall two distinct events that are significant to the story of the Islamic faith. Eid al-Fitr means “the feast of breaking the fast.” The fast, in this instance, is that of Ramadan, the holy month observed by Muslims, which recalls the revealing of the Quran to Prophet Muhammad.

However, some Islamic organizations may closed or offer a reduced level of service. There may be some local congestion around mosques in countries where Eid al Adha is not a public holiday. 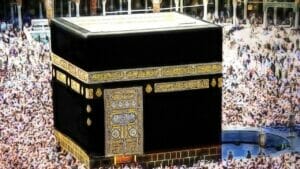 On the tenth of month of Dhu al Hijjah every year, Muslims all around globe hit a date with one of most important religious rituals in Islam, right at end of Ramadan. It is holy “Eid Al Adha”. The material and moral preparations for this day start a few days earlier, and sometimes a month before. The first thing is to morally prepare to do good deeds, to pray, to praise Allah’s name and to do charity work. As it asked in our religion.

Secondly, Muslims asked to save up money in order to be able to purchase “sacrifice”. They goes with it and also to buy clothes and presents for family members and for beloved ones. Thirdly, it is necessary to rearrange house and to prepare it in order to receive guests and to absorb great atmosphere of this occasion.

With arrival of first day of Eid in Arabic and Islamic countries in particular, family members wake up early in order to go to praying places in open air or to mosques. It depending on weather and regulations in different countries. The Aid prayers performed in two Rak’has by Muslims, as they perform seven Takbirs in first Rak’ha and then five Takbirs in second Rak’ha. Then they sit down and they listen in concentration to the Khoutba of the Eid.

After that, they exchange greetings and congratulations and they return home in order to slaughter their “Sacrifice” according to Allah’s saying in Surat Al Kawtar: “Indeed, We have granted you, al Kawtar, So pray to your Lord and sacrifice”. As for the rest of the Aid days, they mostly devoted to praise Allah, to ask for forgiveness, to visit family members and to reconciliate with others.

Eid ul Adha is a day that hails Ibrahim’s devotion to Allah. He was willing to sacrifice his son Ismael as an act of submission to God’s will. Muslims sacrifice an animal on this day, symbolic sacrifice that reminds us of real sacrifice required throughout life.