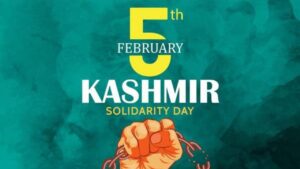 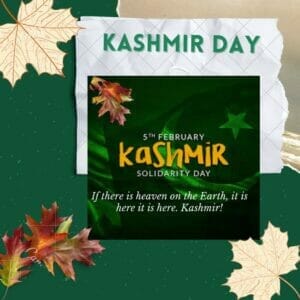 It focuses on showing Pakistan’s support and unity with people of Indian occupy. Kashmir their ongoing freedom struggle and to pay homage to Kashmiri martyrs who lost their lives fighting for Kashmir’s freedom. Kashmir Day is a public holiday in Pakistan and AJK Government offices, banks, educational institutions and businesses remain close.

Qazi Hussain Ahmed propose first kashmir day. He was member of the Jamaat e Islami party in Pakistan in 1990. The present Solidarity Day start by the Pakistan minister of Kashmir affairs in 2004. Solidarity day  also known as ‘Youm-e-Yakhjehti-e-Kashmir’ . It has been observe  in Pakistan as a day of protest against Indian control of part of Kashmir. In both Pakistan and AJK. Processions, rallies, conferences and seminars are organized by many political and religious parties. 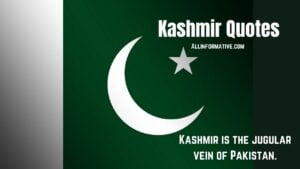 Kashmir is not just place but an emotion that every person wants to experience. The surreal beauty of this gorgeous paradise has been define by several poets, authors and philosophers. The beauty of Kashmir Valley is beyond description. But many celebrities have tried to quote beauty of Kashmir in words.

Here we give Some Quotes about Kashmir Day and its Beauty: 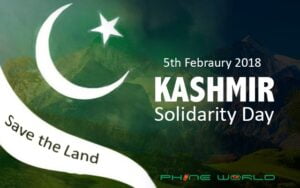 Kashmir Day is a national holiday in Pakistan and also observe by Kashmiri separatists on 5 February each year. It is in observance of Pakistan’s support of and unity with the people of Indian administer Kashmir. The separatists efforts to secede from India and to pay homage to the Kashmiris who have die in the conflict.

Solidarity rallies held in Pakistan administer Azad Kashmir and by some members of the Mirpuri diaspora. In 1991, the then Prime Minister of Pakistan Nawaz Sharif call for a “Kashmir Solidarity Day Strike”. Sharif had come to power with the help of Jamaat the previous year. The 1991 event was still a Jamaat affair.

The present Solidarity Day was start by the Pakistan minister of Kashmir Affairs and Northern Areas in 2004. However, some multinational companies continue normal business activities on this day. Public transport is available throughout the day, but traffic congestion is common in major cities. Major roads and streets remain blocked because of Kashmir Day parades and processions. 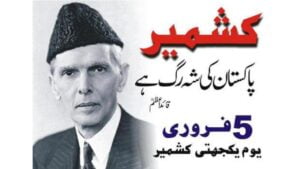 According to 6 September 2019 report by Indian government, nearly 4,000 people have been arrest in dispute region. Among those arrest were more than 200 local Kashmiri politicians including two former. They are chief ministers of state of Jammu and Kashmir. Along with more than 100 leaders and activists from All Parties Hurriyat Conference.

On 3 October 2019, journalists in Kashmir staged sit in protest against enforce communications blackout. They describing total blockade of internet services and mobile phones as a “gag”.

On 4 October 2019, Indian government deny United States Senator Chris Van Hollen’s request to travel to Jammu and Kashmir. Meanwhile Sandeep Pandey, education reformer and other were on informal fact finding mission. They were also bar from leaving airport in Srinagar. On same day, protests were held by local Kashmiri people. They chanted pro Pakistan slogans and demand an end to what they describe as “Indian occupation of their territory”.

On 24 October 2019, village council elections were held across Jammu and Kashmir. It despite boycott by most political parties and detention. Many mainstream local politicians, political scientist Noor Ahmed Baba called it “more like an artificial exercise”. 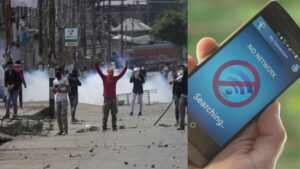 Mobile phone services were barred for 85th consecutive day on 28 October. For at least 2.5 million prepaid cell phone users in Jammu and Kashmir. In January 2020, 2G internet connection was establish in Jammu & Kashmir, albeit only for limited. Whitelisted sites approve by Indian government.

On 16 August 2020, 4G LTE mobile services were restore in two districts Jammu and Kashmir on trial basis. After Supreme Court of India ruled that an indefinite shutdown was effectively illegal.

In December, Indian government arrest at least 75 Kashmiri leaders and activists. To forestall political unrest after an alliance of Kashmir’s opposition political parties won elections in Jammu and Kashmir. 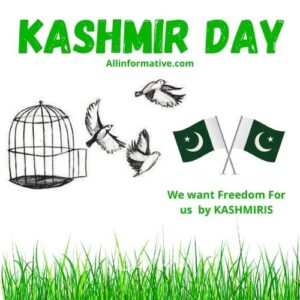 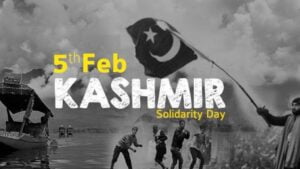 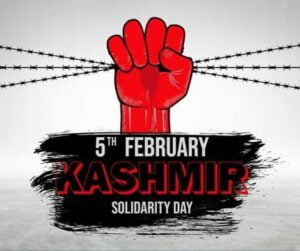 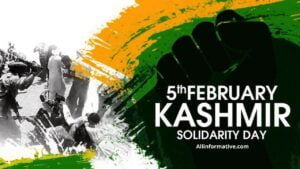 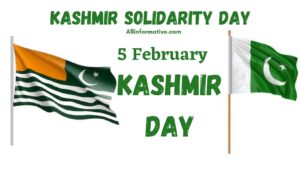 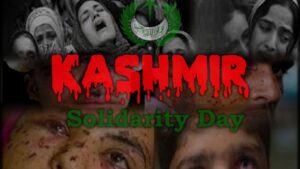 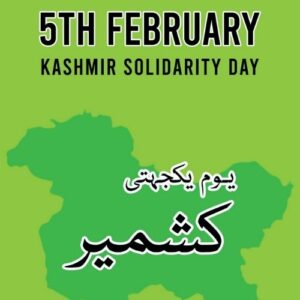 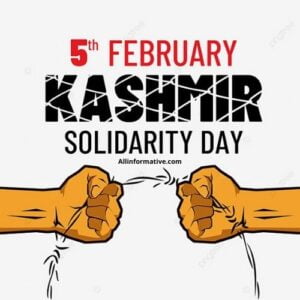 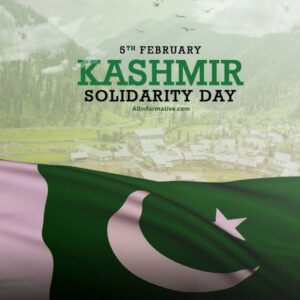 Accession Day is holiday in Jammu and Kashmir, commemorating 27 October 1947. When Maharaja Hari Singh sign off Instrument of Accession. In which Jammu and Kashmir join Dominion of India. 22 October is now mark Black Day to remember Pakistan’s invasion of Kashmir in 1947.

The people of Jammu and Kashmir have been resisting Indian occupation for last 70 years. They are involve in freedom struggle, facing worst kind of Indian state terrorism. They have brave Indian subjugation and atrocities with great courage and New Delhi has fail to intimidate them into submission. On October 27, 1947, sufferings of Kashmiri people start with landing of Indian Army in Jammu and Kashmir. The day is therefore observe as black day throughout world wherever Kashmiris reside.

It is fact that India, disregarding Independence Act and Partition Plan in 1947. That State that Indian British Colony would be divide into two sovereign states, sent its troops in Jammu and Kashmir. India forcibly occupy princely states of Hyderabad, Junagarh and Jammu and Kashmir. The first two being Hindu majority states with Muslim rulers. While Valley had majority Muslim population but run by Hindu ruler.

These resolutions were pass on August 13, 1948 and January 5, 1949. Which were accept both by Pakistan and India. Only one phase of these resolutions was implement while demilitarization of occupy territory and holding of plebiscite still remain un-implement.

The festering problem has led to barbaric killings of thousands of people in valley. In including women and children by Indian armed forces. Since January 1989 till today 2020, Indian troops have martyr 95,686 Kashmiris and widow 22,920 women. Also orphan 107,802 children and molest or gang rape 11,219 Kashmiri women. The rape of women being use as weapon of war to intimidate Kashmiris into submission.

Over 8,000 innocent youth have been subject to disappearance in custody and their whereabouts remain untraced. Many of those are feared to be buried in thousands of unmark graves. That discover in territory after being kill by Indian troops in fake encounters. More than 340 youths have lost their one or both eyes to pellet injuries. While over 1,020 are on verge of losing their eyesight. Hundreds people including Hurriyat leaders have been put behind bars. 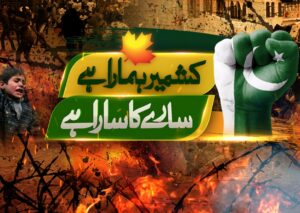 Another date in October is important for Kashmiris on October 22, 1947. Pashtuns and Kashmiri volunteers start to advance to liberate land. Maharaja Hari Singh got unnerve and fled area asking for Indian help. India immediately launch forces which land in Srinagar on 26 Oct 1947. The Maharaja sign Instrument of Accession later.

The advance by Kashmiri and Pashtun tribal leaders resulted in partial success as Indian forces had already reach Srinagar. The liberated area was rename as Azad Jammu and Kashmir. Since 5 Aug 2019, India has convert IIOJK into largest human cage of world. In violation of all existing HR treaties and bindings.

A mass genocide and change in demography is taking place. Political leadership of IIOJK in detention or house arrest and is being forcibly sideline. As Pakistan continues to stand with Kashmiris in their fight for right of self determination. October 22 remains day when Kashmiri people stood up for their rights in 1947. They shall never surrender to unjust and brutal regime of India.

As global players continue to ignore resolution of dispute, it has become humanitarian issue in region. The issue remains an international dispute. However, because of its very weak case on dispute valley, India terms it bilateral dispute and avoids internationalizing issue. 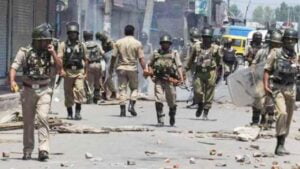 The 2019 to 2021 Jammu and Kashmir lockdown refers to security lockdown and communication blackout. It has been impose throughout Indian administer union territory of Jammu and Kashmir. The following revocation of with goal of preemptively curbing unrest, violence and protests. Thousands of civilians, mostly young men have been detain in crackdown.

The Indian government has state that tough lockdown measures and substantially. It increase deployment of security forces has been aim at curbing terrorism. The lockdown officially started on 5 August 2019, following revocation of special status of Jammu and Kashmir. This via of Indian constitution and subsequent introduction of Jammu and Kashmir Reorganisation Act, 2019.

Since lockdown was brought into effect, no foreign journalist has been allow by Indian government. It report from new union territory of Jammu and Kashmir. The latest clampdown in occupied Kashmir by Indian government that start on August 5, 2019 completes one year. Today with life far from normal for 12.5 million Kashmiris.

Thousands of tourists and students scramble to get places on planes and buses. They leaving Indian occupied Kashmir after Indian government warn of threat of “terror” attacks. Panic gripped occupied Kashmir since late July after India announce deploying at least 10,000 more soldiers. To one of world’s highest militarised areas.

Kashmir is a valley between Great Himalayan range and Pir Panjal mountain range. It is place of beautiful simplicity and pristine natural beauty. It is paint with unique culture that keeps you intrigue throughout your journey. It keep from Srinagar to Sonamarg and Gulmarg till Pahalgam. Kashmir Day or Solidarity Day is a public holiday in Pakistan on February 5 each year. It is not just place but an emotion that every person wants to experience. This Day is also of particular political importance to major political and religious parties.

What is beauty of Kashmir?
The valleys of Kashmir are untame and unspoilt. Surrounded by  sublime mountains, these valleys echo nature, beauty and certain level of mysticism. Charming lakes in Kashmir are crystal clear, stunning and pristine. Srinagar boasts of Dal and Nageen Lakes which are stunning.
Is Kashmir in India or Pakistan?
India has control of about half area of former princely state of Jammu and Kashmir. Which comprises Jammu and Kashmir and Ladakh. While Pakistan controls third of the region divide into two de facto provinces Azad Kashmir and Gilgit Baltistan.
What is the date of Kashmir Day?
Kashmir have a long history, many days and dates but 5 February is main date of Kashmir Solidarity Day.